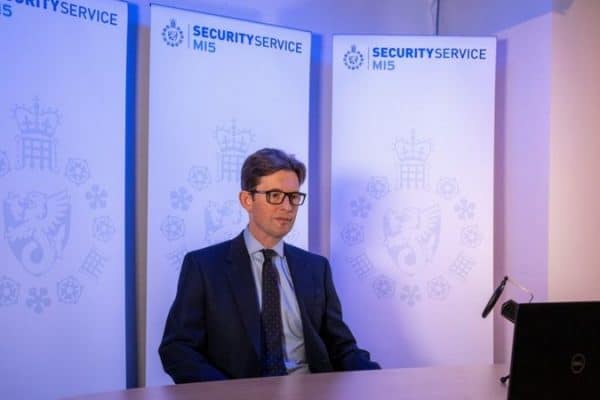 Britain is facing a “nasty mix” of national security threats, from hostile state activity by Russia and China to fast-growing right-wing terrorism, the new director general of MI5 has said.

The Covid lockdown raised the risk of online contact between groups, and made covert surveillance harder, he added.

Mr McCallum was speaking at his first media briefing as head of the service.

The new man at the top of the UK’s domestic intelligence agency since April is a slim, youthful Glaswegian mathematician by training. He likes hiking up mountains when his parenting and work allows.

After 24 years at MI5, some of it seconded to industry, he is surprisingly comfortable in front of the camera and he is setting about making parts of his organisation more visible to the public.

“We spend our days and nights planting microphones in attics – with warrants – and meeting covert informants,” said Mr McCallum, “so we are used to operating in secret with extreme care.”

With MI5’s key workers being tasked with safeguarding national security it has had to try to maintain staff levels inside its headquarters building at Thames House with social distancing.

Data analysts, scientists, researchers and medically-qualified staff have been seconded to help the NHS and with vaccine research.

On the threat from jihadists, Mr McCallum said there are still tens of thousands of people committed to that ideology.

The challenge was to make the difficult judgements on the small numbers amongst them who are going to turn to violence.

More terrorists these days, he said, have opted for fast, simple plots, giving away fewer clues and less time to find them.

Around 950 UK-linked extremists travelled to war zones in Syria, he said.

On average, most of those who have returned did so early on and tended to be less extreme.

A significant number of those who remained have been killed, others are in third countries, some are interned in camps in Syria while yet more are still at large in north-west Syria.

The new threat is from right-wing terrorism, where MI5 took over the lead from the police in April.

Out of 27 terrorist plots disrupted in the last four years, eight have involved right-wing extremists.

Many of the adherents around the world are very young, indicating the problem may be around for some time.

MI5 regularly compares notes with its counterparts in the FBI, European agencies and the other nations in the Five Eyes grouping – US, Canada, Australia and New Zealand .

But so far there has not emerged a single, global, unifying ideology in the way the Islamic State group or al-Qaeda have had.

Russian, Chinese and Iranian espionage and disruption is all growing in severity and complexity, said Mr McCallum.

The threats are to people, the economy, infrastructure, academic research and democracy.

MI5 has an operational role in investigating certain individuals and disrupting their activities, and a protective role building up UK’s resilience in the cyber and physical spheres.

Dealing with China requires a complicated balance, he said.

He said there is a need to work with China on issues like climate change, but at the same time to be robust in confronting its covert activity.

New legislation is expected to make a big difference in bringing the law up to date in criminalising what foreign espionage agents get up to inside Britain.

Mr McCallum used a meteorological analogy, saying Russia was like bad weather but China was a far greater challenge in the long-term and more like climate change.

Since 2018 Mr McCallum has spent part of career focusing on new technology and Artificial Intelligence, or machine learning.

He said when a suspect is arrested there are multiple digital devices to be trawled through, often containing terabytes of data.

With police allowed to hold a suspect for 14 days it can become a race against time to find court-usable evidence such as photographs of guns or proscribed IS flags.

AI helps pluck these out far faster than humans can. It can also help with translations of vast tracts of text.

And then there is CCTV footage.

When a covert camera is placed watching a door, for example, it might only be opened after hours of no activity. AI will save someone having to trawl through all those hours of nothing.

“AI has massive applicability for our business,” Mr McCallum said.

The Manchester bombing of 2017 prompted public criticism that MI5 should have done more to stop it.

The bombing was followed by two in-depth reviews looking at both the facts of the case and how MI5 can improve in the future, and the bomber’s brother Hashem Abedi was successfully prosecuted.

There have been sweeping changes but the hardest thing for anyone in MI5 is that “we cannot stop every single attack”, Mr McCallum said.

And yet, he said: “When my phone rings late in the evening my stomach still lurches.”